The role of business in development is maturing. Partnership is moving out of a position in philanthropy, firmly in to new business development, which in NGO language, means new models for development. This week, discussions about building a new global partnership with business, convened by Business Action for Africa, really delved in to the stuff of partnership. How refreshing. Here are some of the key insights from the discussions and their great report:

Alistair Fernie of DfID; Anne McCormick of Diageo Africa; Inci Yalman of Standard Chartered; and Duncan Learmouth of GSK were thoughtful and open. Their reflections on the challenges for business and government helped highlight the opportunities we have with the post 2015 agenda. Okay, so this is not the practical framework for partnership. But what it indicates is the direction this work is going, and highlights that readiness to partner is now business critical. Let’s tackle the practical partnership essentials in another blog.

For details on specific partnership case-studies, read this great report from Business Action for Africa, Harvard Kennedy School and The Partnering Initiative titled, ‘A New Global Partnership With Business.’

Partnership starts with building trust. Here’s the journey we take organisations on from immersion to action in 5 easy hard-working and committed steps… 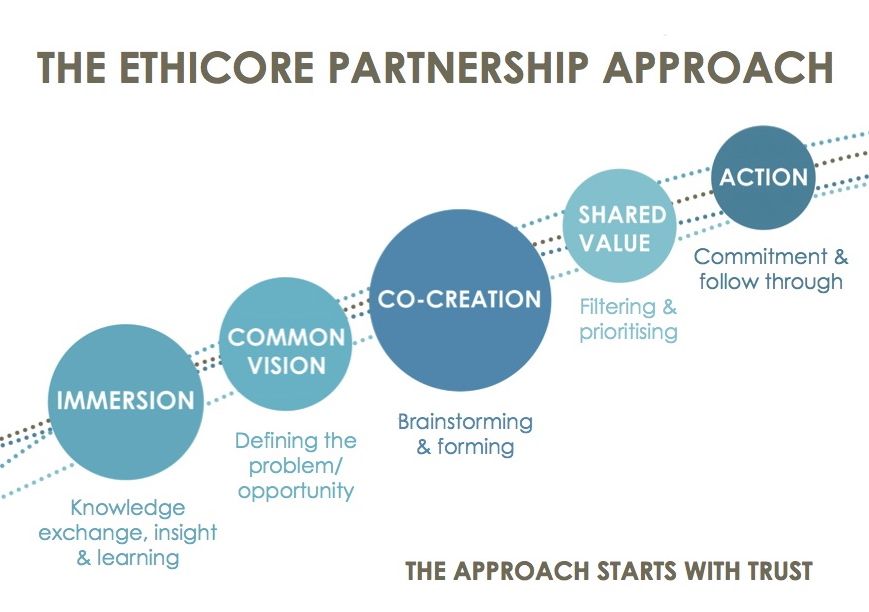 The approach starts with trust.

NGO and Corporate partnerships: is language one of the main barriers in making useful connections?

It would be naive of me to suggest that NGO and Corporate partnerships (MNC) are the new, perfectly harmonious, utopian partnerships that will drive the ‘for purpose’ agenda forward. However, it is equally naive to think that all partnerships are homogenous in their approach, and even, as Ethicore often finds, that all NGOs are driving the good agenda, and big business are the ‘bad fat cats’ of the world. We have hit a time of flux; with an economic system never seeming to recover ‘as projected’, funding for doing good is limited, even negligible. The increasing challenge of traditional approaches are not all doom and gloom, though, as what has occurred is a greater focus on innovative approaches to funding, and a space for new voices and new approaches to be championed.

One of these approaches, now appearing more, is that of NGO and MNC partnerships. Ethicore have worked with numerous organisations spanning the spectrum between these two terms, and have found that the divide between the two types of organisations is less clear than we may assume. What I think is easy to forget, is that both ends of the spectrum are made of individuals, individuals who now, more than ever, are conscious in their consumption, and critical of traditional business practices. NGO and MNC corporations bring with them the possibility of new access to funding, audiences, new ideas of how change can be made and scaled, and even knowledge and expertise in how problems can be faced.

Reflecting on several partnerships that successfully investigate the potential and mutual, albeit differing, benefits of NGO MNC partnerships, it struck me that one of the first hurdles that needs to be tackled is that of language. Although we assume that we are all talking the same language, it appears that, actually, we are not: the language of the NGO world sits in disparity to that of the corporate world, and what is prioritised, is shown in the way we speak. NGOs, for example, often speak in terms of ‘gender’, which appears to clash with discussions of ‘profit’, whereas talk of ROI sits uneasily with those who want to talk SROI.

All that being said, are we really talking about different things? Should this stop us from trying to have partnership dialogues at all? As I have found time and time again, actually, the answer is ‘no’.

When we strip away the jargon of the organisations, to the issue at the core of these linguistic embellishments, what we find is often similar. For example, the most common overlapping interest is that of developing economies. MNCs, on the most part, understand the new approaches that need to be found to make sustainable business agendas within these regions, but what they lack in areas such as the cottage industries, the role of gender, and how to create the S of ROI*, is the knowledge of how to do this. What NGOs lack is the same sort of potential for scale, networks, and capital. Together, carefully approached partnerships can be created to bring the SROI that all want. Partnerships, as noted, are not a one-size-fits-all solution, and are dependent on the organisations engaging in the discussions. You have to find the genuine mutual interest first, and build a partnership from there, as well as carefully checking on the power relations that develop, and being prepared to work hard to achieve the wants of all involved based on the inputs each organisation is prepared and able to give.

It is not a marriage of convenience, but one of work. As we all know, with hard work we can achieve great things. I, then, suggest that we have to look beyond seemingly clashing languages and priorities and start with the core issue we want to effect and change. I sometimes think it worth remembering, that if organisations, especially the people within them, had no overlap, then there would be no discussions. Even if sometimes we need ‘interpreters’ in the initial stages to help us understand what each other is really talking about.

Now if only we could create the NGO-MNC dictionary…

* Arguably S should now, certainly in this case, stand for Sustainable as well as Social

In a recent 2 Degrees discussion forum on whether consumers will pay for sustainability, Chris Coulter@GlobeScan made an excellent strategic point:

“This is not so much about ‘will consumers pay for sustainability’ but more about how can companies committed to sustainable performance (at both the corporate and product level) leverage their investments to make them more relevant in the marketplace. This takes us out of the more linear debate about what attributes matter most (price, quality vs. environment, sourcing, etc..) and into how these various attributes blend together in a meaningful way for customers. How can environmental integrity best reinforce primary purchasing drivers related to quality, for instance? Once this framework is applied, wonderful opportunities are uncovered that not only reinforce sales and loyalty, but also allow for greater alignment across the enterprise.” Chris Coulter, GlobeScan

Chris has identified the strategic insight for business.  Consumers increasing expect rather than demand sustainability.  The opportunity is to package the sustainability in to the offering, to enhance value.  ONCE A COMPANY IS RESPONDING to the “wonderful opportunities that sustainability uncovers…”, I would share three key insights with companies:

1. Consumers love their brands and want them to be ‘GOOD’.  So tell them how good you are now and will be in the future.

2.  Consumers are overwhelmed and don’t know who to trust.  So strive for simplicity and get trusted intermediaries to share your message.

3. Consumers don’t want to be the exception.  So, make sustainable the norm, and help consumers feel good and part of something bigger

It is about the company leveraging their investment in sustainability.  But it is also about the consumer getting MORE than the price and quality they demand and experiencing some of the value from the sustainability they expect.

For more insights and actions, listen again to Rachael’s presentation on 2 degrees, entitled, “Translating sustainability to Customers and Consumers”.

Let’s share what Corporate Partnership Managers say about this, according to the Guardian Voluntary Sector Network.  You can read the full article here.